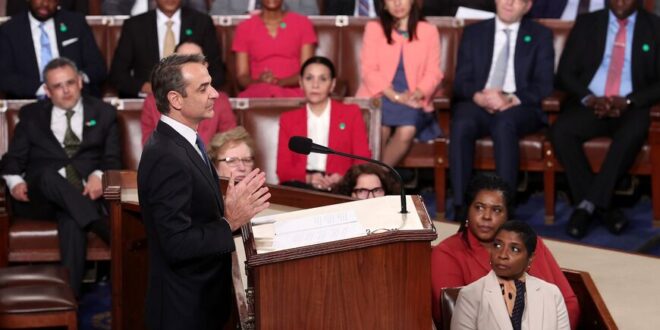 Enraged by the Greek premier’s remarks to US Congress against arms sales to Turkey, Erdogan denounces Greece, along with Sweden and Finland, for supporting terrorism.

Opening up a new battlefront with NATO allies, President Recep Tayyip Erdogan announced late Monday that he had “written off” Greek Prime Minister Kyriakos Mitsotakis for lobbying the US Congress against military sales to Turkey.

The president’s criticism of Greece, another NATO ally, comes as Erdogan and his political ally Devlet Bahceli maintain Ankara’s objections to NATO accession of Sweden and Finland. Following Erdogan’s phone conversation with his Finnish and Swedish counterparts over the weekend, two delegations, headed by Swedish State Secretary Oscar Stenstrom and Finnish State Secretary Jukka Salovaara, will hold talks in Ankara on Wednesday. The Turkish side will be chaired by Deputy Foreign Minister Sedat Onal and Ibrahim Kalin, the presidential spokesman and Turkey’s de facto national security adviser.

Erdogan, who made a fiery address to the nation after the cabinet meeting late Monday, reiterated what he called Ankara’s “principled approach” to NATO’s enlargement. “I have told all our counterparts  that they have to choose between providing practical and political support to terrorist organizations and expecting Turkey’s consent to their NATO membership,” he said, singling out Sweden, whose streets he claimed were filled with flags of  terrorist groups PKK/YPG “a few days ago.”

Upping the rhetoric, Bahceli  said that Turkey would leave NATO if his country’s security concerns were not met.

“We existed before NATO, and we would not perish without it,” he told his right-wing Nationalist Movement Party. “How can we tolerate these states that still have terrorists roaming their streets? Sweden is the control room of the separatist terrorist group in Northern Europe.”

NATO Secretary-General Jens Stoltenberg maintained his Nordic calm and said NATO would have to “sit down and find a solution” as it has done many times.

“I recognize the importance of addressing Turkey’s concerns,” Stoltenberg told the World Economic Forum in Davos, Switzerland. Calling Turkey “an important ally” that has played a “key role in the fight against ISIS/Daesh” and has a “strategic geographic location,”  he said that “no other NATO ally has suffered more terrorist attacks than Turkey.”

According to Ziya Meral, a senior associate fellow at Royal United Services Institute, a London-based think tank, while it is understandable for Turkey to use the moment to achieve some of its own interests, its gain may not amount to much. “Unless the present standoff is de-escalated soon, Turkey will revert a lot of good work it has done last 12-months in easing of relations, reaching out to investors and rebuilding trust,” he told Al-Monitor.

Suat Kiniklioglu, a former lawmaker and foreign policy analyst, maintains that Erdogan has overplayed his hand. “The limited grace he has obtained in the wake of Russia’s invasion of Ukraine seems exhausted — not with what he puts forward as conditions for NATO enlargement but the public way he has done it,” he said. “So Turkey finds itself on the defensive once more,” and the Western reaction shows that “the ground Turkey lost since 2013 is not yet overcome.”

Greek prime minister Mitsotakis, who addressed a joint session of the US Congress and was hosted by President Joe Biden (an invitation yet to be received by Erdogan), urged the Congress last week not to approve the sale of F-16 fighter jets to Ankara.

Enraged, Erdogan called off a strategic meeting between Turkey and Greece. “Mitsotakis no longer exists for me,” he said. “I will never agree to meet him.” When the two met in March, he said, “we agreed not to involve third countries in our bilateral issues. We will continue forward with honorable politicians, those who stand behind their words.”

An official source told Al-Monitor that the president felt “betrayed” and that Erdogan considered the F-16 deal symbolic in bilateral Turkey-US relations and in Turkey’s demands from NATO allies that military embargos against Ankara should be lifted. “Not that the US needs Mitsotakis to decide what they would do,” Erdogan said.

As a sign of thawing relations between Washington and Ankara, the Biden administration asked Congress in March to approve the sale of weapons and equipment upgrades to Turkey’s fleet of American-made F-16 fighter jets. The move would enhance “long-term NATO alliance unity and capability interests, as well as U.S. national security, economic and commercial interests,” a letter from the State Department to the Congress said.

However, Mitsotakis said such a decision would, on the contrary,  destabilize NATO. “The last thing that NATO needs, at a time when our focus is on helping Ukraine defeat Russia’s aggression, is another source of instability on NATO’s southeastern flank,” he told Congress. “And I ask you to take this into account when you make defense procurement decisions concerning the Eastern Mediterranean.”

Mitsotakis also presented Biden with a file of Turkish violations over the Aegean sea and airspace. According to the Greek media, he also asked Biden to use his influence to launch a new round of talks for a solution on Cyprus.

“The Greek government has done a very good job in maximizing diplomatic tensions Turkey finds itself in,” Meral said. Turkey’s reluctance to admit new NATO members, he said, is “once again providing different interest groups to push on with their own policies on Turkey.”

Since the Erdogan-Mitsotakis meeting in March, ties have gone south for the two neighbors with competing claims on sea and airspace in the Aegean. Turkey and Greece are also at odds over jurisdiction in the Eastern Mediterranean and the divided island of Cyprus. On May 9, Athens revoked Turkey’s planned participation in a Greece-hosted NATO air drill and also suspended confidence-building negotiations due to begin between Greek and Turkish diplomats next month. Turkey, in turn, said that it was boycotting the “Tiger Meet” drill.

The Greek government kept a cool tone while the Greek media predicted a hot summer in ties or wondered whether Turkey would send refugees across the border. Greek government spokesman Yiannis Economou said Athens would not engage in a clash of statements with Turkey’s leadership. “Greek foreign policy is strongly founded on history, international law and our alliances, however much that may annoy some,” he said.