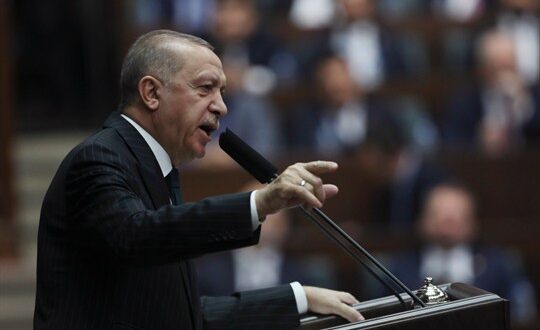 An Isolated Erdogan Learns the Cost of Hubris in Idlib

Turkish President Recep Tayyip Erdogan traveled to Russia on Thursday, seeking to persuade President Vladimir Putin to help stem disaster in Syria’s Idlib province. Turkish forces are locked in fierce combat there with Syrian President Bashar al-Assad’s army in what has become the last bastion of the armed rebels fighting the regime.

Before the trip, Erdogan made two other related moves to strengthen his hand. First, he pleaded with NATO to come to his aid. Then, to increase his leverage with his European allies, he opened Turkey’s borders for Syrian refugees to cross into Greece, raising the specter of another mass refugee crisis like the one that roiled Europe in 2015. That previous wave of refugees and asylum-seekers boosted far-right parties across the continent, with consequences that are still visible today.

Post Views: 79
Previous Turkey Is Playing With Fire in Syria
Next Libya’s Expanding Proxy War May Be the Ultimate Test of NATO’s Resilience