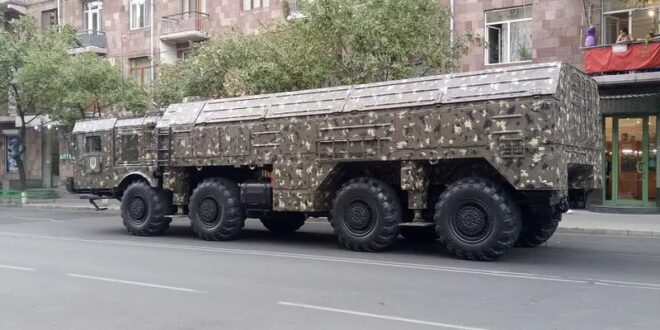 The Russian leader met with his Belarussian counterpart, Alexander Lukashenko, Saturday in St. Petersburg, where Lukashenko told Putin that Belarus is concerned by the “aggressive” and “confrontational” policies of its neighbors Lithuania and Poland.

He asked Putin to help Belarus respond to what he said were nuclear-armed flights by the U.S.-led NATO alliance near Belarus’s borders. Iskander-M systems have a range of up to 500 kilometers and can carry both conventional and nuclear warheads.

The news followed reports from Ukraine’s northern military command that Russia had fired 20 rockets from Belarus, targeting the village of Desna in the northern Chernihiv region. In addition to rockets launched from the ground, Ukraine’s air command said Russian long-range Tu-22 bombers were deployed from Belarus for the first time. The neighboring country hosts Russian military units and was used as a staging ground before Russia invaded Ukraine, but its own troops have not yet crossed the border.

Ukraine military intelligence said the attack was directly linked to Moscow’s effort to pull Belarus into the war.

To the west, Russian rockets hit a “military object in Yavoriv, Lviv regional governor Maksym Kozytskyy said. He did not give further details of the target, but Yavoriv has a sizable military base used for training fighters, including foreigners who have volunteered to fight for Ukraine.