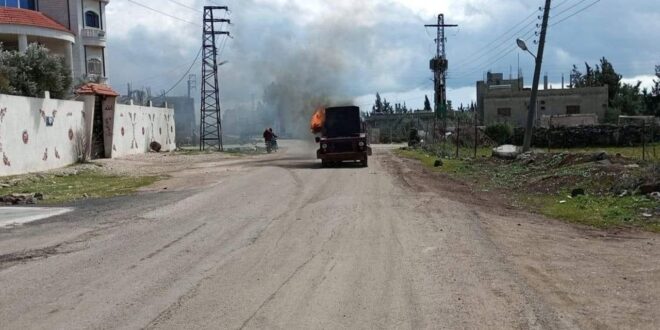 “Assassination” of Former Member of Opposition Factions in Daraa

On Wednesday, unidentified gunmen assassinated a former member of opposition factions in the western Daraa governorate.

The website of the Ahrar Horan Gathering said that unknown assailants targeted Fadi Majed al-Saad in front of a shop in the town of al-Muzayrib, west of Daraa, causing his immediate death.

The opposition website added that Saad is a resident of the Golan, a displaced person, and a former member of the Free Syrian Army. He did not join any of the regime’s military formations after the settlement.

On Monday, a leader of opposition factions was killed by regime forces in the western countryside of Daraa.

Sources said that the leader Mohammed Iyad al-Aqrabawi succumbed to his wounds after being arrested by regime forces during the raid on his house in the town of Yadouda, west of Daraa.

Aqrabawi was seriously injured during clashes that broke out at dawn near his home with forces belonging to the Military Security Branch in cooperation with a local militia led by Mustafa al-Masalmeh, nicknamed al-Kasm, sources said.

Aqrabawi hails from the Yadouda camp and is a former FSA member who refused to make the settlement and joined the group of Moaz al-Zuubi after the settlement. Zuubi is wanted by the regime’s security services.

Since the Syrian regime took control of Daraa in 2018 with Russian support, through settlement agreements between the regime and the factions of the Free Syrian Army, chaos and assassinations have spread. In August, 53 people were killed in the Daraa governorate, including two children, a woman, and a media activist who died under torture in Sednaya military prison.