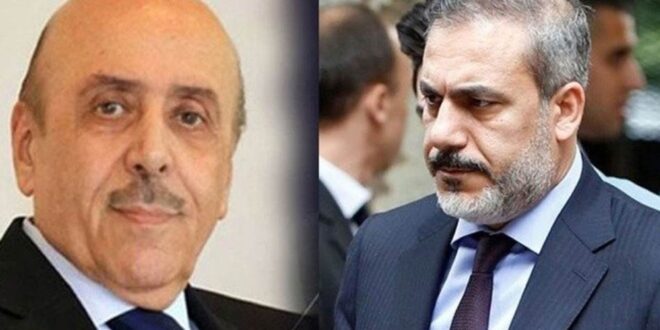 Intelligence Online reported that Hakan Fidan and Ali Mamlouk have met again under Russian auspices, according to al-Modon.

The French intelligence website explained that Moscow sponsored the meeting as part of its efforts to “play the role of a mediator” in the rapprochement between the Turkish government and the Syrian regime. The website reported “unsatisfactory” results of the meeting, noting that it “at least allowed the two sides to determine their demands and present their terms to each other.”

This development comes in light of talk of a Russian-led reconciliation between the Turkish government and the Syrian regime, 11 years after bilateral relations were severed. Ankara cut ties because it considered that President of the Syrian regime Bashar al-Assad had refused to respond to demands for reform following the outbreak of the Syrian revolution in March 2011, as well as the regime’s excessive use of force in suppressing the uprising. That repression developed into the use of air strikes and barrel bombs to attack cities outside Assad’s control, accompanied by the development of the Turkish discourse describing Assad and his regime repeatedly as “illegitimate” and “murderous.”

Before talking about reconciliation, Turkish Foreign Minister Mevlut Cavusoglu made no secret of joint coordination occurring between the two intelligence services. In a televised interview in early September 2021, he said that there is “a regime in Syria that is not recognized by the world, so there is no doubt that we are not conducting direct political negotiations with it. But on security issues, we are both fighting terrorism.”

Turkish President Recep Tayyip Erdogan also said after a bilateral summit meeting with Russian President Vladimir Putin in the resort city of Sochi in early August that there was already communication between the two intelligence agencies on counterterrorism issues.

The first meeting, which brought together Mamlouk and Fidan, dates back to August 2021 in the Iraqi capital Baghdad, according to Turkish media. Those sources described the meeting at the time as “historic” after the rupture in bilateral relations. The sources revealed that the meeting’s content will focus on combating the Kurdistan Workers’ Party and other security issues, considering the meeting “the beginning of a new era.”

In April, a source from Turkey’s ruling Justice and Development Party (AKP) confirmed to Al-Modon that Moscow hosted a meeting of Turkish and Syrian intelligence services, noting that “the security meeting dealt with security and intelligence issues only.”

For its part, the Syrian regime’s media denied that such meetings took place, describing the news as “scandalous Turkish media propaganda as the presidential elections in Turkey approach.”