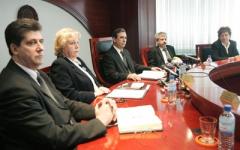 Macedonia’s Constitutional Court has decided not to launch a procedure following an initiative put forward by the opposition Liberal Democratic Party, LDP, to review the constitutionality of the recent Macedonia-Kosovo border ratification agreement.

The judges decided that the bilateral agreement involved only a demarcation deal and did not changed the border like LDP claimed. The party had objections to some parts of the deal that, according to them, gave a small Macedonian territory to Kosovo.

LDP argued that the agreement was unconstitutional because it passed with a simple majority, rather than with the two-third Parliament majority the Macedonian Constitution demands in cases of border alteration.

“The content of the agreement is not within the jurisdiction of the Constitutional Court,” its spokesman Jugoslav Milenkovic told Media.

The International Civilian Office, ICO, in Kosovo, as the main supervising authority for the implementation of the Ahtisaari status plan for Kosovo, has been intensively engaged in resolving the issue.

Despite the fact that Serbia has no effective control over the Kosovo-Macedonia border, Belgrade still insists that the border delineation should be conducted in conjunction with its officials and not with those from Pristina.

Skopje stated that it wishes to have good relations with both Belgrade and Pristina, with whom it nurtures important economic ties.