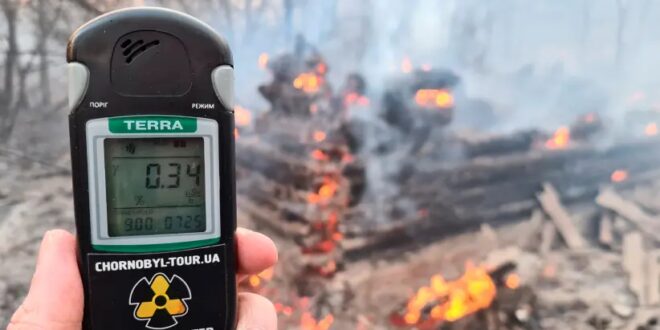 In yet another claim of false flags and nuclear issues, Russia alleged that Ukrainian security services and the neo-Nazi Azov Battalion are planning a radioactive incident to blame on Russia.

A nuclear reactor in Kharkiv is the target of a planned false flag attack by the Ukrainian security services (SBU) and the Azov Battalion, the Russian Defense Ministry and official Russian state media outlets alleged.

“The SBU, together with the militants of the Azov Battalion, are preparing a provocation with possible radioactive contamination of the area near the city of Kharkiv. Nationalists mined a reactor at an experimental nuclear facility located at the Kharkiv Institute of Physics and Technology,” the report said, according to TASS and Interfax. “The SBU and the militants of the Azov Battalion” plan to blow up the reactor and accuse the Russian Armed Forces of allegedly launching a missile attack on an experimental nuclear facility.”

Both Ukraine and Russia have made many accusations of false flag operations prior to and during the Russian invasion of Ukraine. Russia has also claimed many times that Ukraine is seeking to regain nuclear weapons, though the country previously gave up its Soviet nuclear weapons in return for security guarantees from Russia. There have also been multiple scares regarding nuclear facilities and nearby fighting causing radioactive incidents.

Russian media cited an unnamed source on Sunday as saying that Ukraine was close to building a plutonium-based “dirty bomb” nuclear weapon, although the source cited no evidence. The TASS, RIA and Interfax news agencies quoted “a representative of a competent body” in Russia who said that Ukraine was developing nuclear weapons at the destroyed Chernobyl nuclear power plant that was shut down in 2000.

“The dangerous games of the Kyiv regime regarding its plans of acquiring nuclear weapons are a matter of serious concern. This must be prevented!” the Foreign Ministry tweeted

Shortly before the invasion, Russian President Vladimir Putin said in a grievance-filled speech that Ukraine was using Soviet know-how to create its own nuclear weapons and that this was tantamount to preparation for an attack on Russia.

Late Thursday night there was an incident in which the Zaporizhzhia Nuclear Power Station, the largest nuclear power plant in Europe, was shelled by Russian forces.

In a statement early Friday morning, Ukrainian President Volodymyr Zelensky said the targeting of the nuclear power plant was no accident and called on European powers to take action before Russia caused a nuclear disaster.

“Russian tanks are equipped with thermal imagers, they know where to shoot,” Zelensky said in a video address.

Russian officials claimed that the shelling and consequent fire at the plant were the result of attempts by Ukrainian forces intentionally trying to get Russian attacks to strike the plant.

“Last night on the territory adjacent to the power plant, an attempt was made by the Kyiv nationalist regime to carry out a monstrous provocation,” said Russian Defense Ministry spokesman Igor Konashenkov, who also claimed that the plant was already under Russian control from February 28.

On Sunday, the IAEA chastised Russia for not allowing the Ukrainian plant workers to properly do their jobs by interfering with the reliable communications and safety needed by the regulators.

On February 25, a day after the defunct Chernobyl Nuclear Power Plant was captured by Russia, Ukraine reported increased radiation levels at the site as a result of heavy military machinery dispersing radioactive dust into the air.

The Chernobyl nuclear reactor is the site of the worst nuclear disaster in history.

Post Views: 89
Previous Russia recruiting Syrians to fight against Ukraine – US officials
Next If the US or NATO Put Fighters in the Air Over Ukraine We’d Have World War