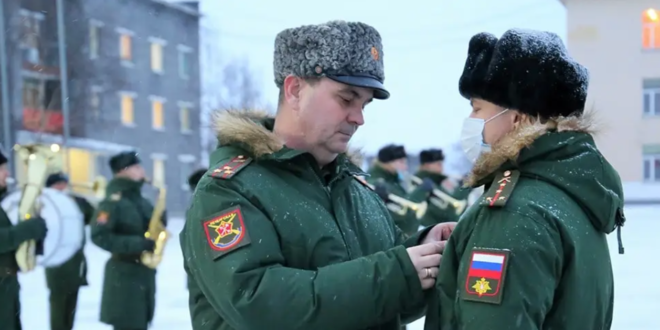 Following the death of Russian Lieutenant-General Yakov Rezantsev, being killed in Chornobaivka Airfield near Kherson, the Ukrainian forces killed another high-ranking commander. Russian Colonel Denys Kurilo, brigade commander of the 200th Separate Motor Rifle Brigade, had been killed along with 1,500 of his troops near Kharkiv.

The General Staff of the Armed Forces of Ukraine broke the news through a Facebook update stating that fighting still rages on in Kharkiv and Barvinkove as Russian forces were trying to capture the city of Izyum. Continued fighting was also seen in the settlements of Kamyanka, Sukha Kamyanka, and Tykhotske. The AFU StratCom also reported the news.

The Ukrainian Armed Forces implied that units from the 1st Tank Army had backed up the 200th Separate Motor Rifle Brigade. However, it was in vain as the Ukrainian forces obliterated the brigade.

“The 200th Separate Motorized Infantry Brigade of the Russian enemy lost two battalion-tactical groups and personally the brigade commander, Colonel Denis Kurilo [Russian Colonel Denys Kurilo] in the battles near Kharkiv. The losses only of one [200th] brigade amounted to more than 1,500 servicemen,” said the General Staff of the Armed Forces of Ukraine in a translated version of the post.

During that battle early in March, the 200th brigade was supposedly defeated by an incomplete Ukrainian mechanized battalion in a head-to-head battle. It was also Butusov who reported that Kurilo had allegedly abandoned his soldiers and fled when they had been fighting.

For extra context, Butusov is the journalist who socked pro-Russian politician Nestor Shufrych during Savik Shuster’s Freedom of Speech talk show when the politician refused to condemn Russian aggression before the start of the Russian invasion. In videos circulating online, they were seen to be brawling on live television, much to the enjoyment of the studio audience. Former Ukrainian President Petro Poroshenko was also in the studio when the brawl had transpired.

It appears that two enemy battalion and tactical groups from the 200th Brigade (or what remains of it) had been wiped out completely off the map. Journalist Alexander Khrebet reported that only 3 of the 648 Russian soldiers survived the onslaught, with 2 of the 3 men being wounded.

As of writing, only Ukrainian sources could be found reporting on the death of the commander and the destroyed Russian brigade, which does question the legitimacy of the reports. However, circumstantial evidence does exist as open-source data collectors have placed both Kurilo and 200th Separate Motor Rifle Brigade near Kharkiv as of early March. This would also indicate that they had barely moved after being ambushed by the Ukrainians, leaving one of the “elite” Russian brigades not-so elite after all.

Russian morale has been absolutely dismal. Russians had allegedly no food, no fuel, and were experiencing frostbite due to their ill preparation for the cold weather. This would be ironic since Russia also deals with a fairly similar climate (and even more intense winters). An earlier SITREP reported that a fratricide had happened within the Russian forces. Colonel Yuri Medvedev was driven over by a tank driver who was frustrated with the number of casualties in his unit. The colonel was reportedly alive, but it demonstrates the state of mind the Russian troops were in. Spoonts also reported that Russian soldiers were being forced to fight with their fellow soldiers threatening to kill them if they refused, a phenomenon our Editor-in-chief calls “at the push of bayonets” derived from an old British army order.

SOFREP also joked earlier that the Russian Armed Forces was saving a lot of money on retirement pensions for its senior officers as they continue to drop dead to the underdogs, which says a lot about how powerful the Russian forces are. More so, it does say a lot about how Russian soldiers are trained for a huge amount of their high-ranking officials needed to go to the frontlines to shape them up to fight – only to be killed in the process.