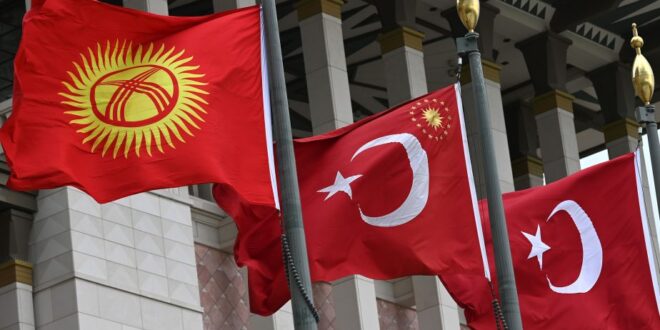 Abducted From Kyrgyzstan, Educator Orhan Inandi Paraded in Turkey as a ‘Terrorist’

Turkish President Erdogan, who previously denied knowing anything about Inandi, announced his “capture” by Turkish intelligence.

Three weeks after reportedly replying to an inquiry directly from Kyrgyz President Sadyr Japarov that he did not know Orhan Inandi, Turkish President Recep Tayyip Erdogan lauded the “genuine and patient” work of the country’s intelligence agency in bringing Inandi back to Turkey.

“As a result of genuine and patient work, MIT has brought a top Central Asian leader of FETO, Orhan Inandi, to our country to face justice,” Erdogan said, using Turkey’s term for the Gulen movement, during a July 5 televised address following a cabinet meeting.

Inandi appeared in the broadcast in handcuffs before a pair of Turkish flags. One of Inandi’s hands appeared swollen and bruised as he clasped them together.

The announcement confirms what Inandi’s family and supporters had feared after his disappearance on May 31.

Inandi, 53, has lived in Kyrgyzstan since the early 1990s and has been a Kyrgyz citizen since 2012. He is the founder of the Sapat school network in Kyrgyzstan. The Sapat system, previously operating under the name Sebat, operates more than two dozen schools in Kyrgyzstan, including Ala-Too International University in Bishkek, and is linked to the global network of schools with ideological ties to Fethullah Gulen.

Gulen, who resides in the United States, was once an ally of Erdogan but is now his prime enemy. Since an alleged coup attempt in 2016, which Ankara blamed on Gulen and his supporters, Turkey has leaned heavily on partner nations around the world to close schools founded by Gulen’s network and extradite Turkish citizens (and former Turkish citizens) it claims are terrorists. Turkey branded Gulen’s movement a terrorist organization, using the acronym FETO (“Fethullah Terrorist Organization”) which by default opens Turkish educators and generations of students around the world to being called “terrorists” by Ankara.

Central Asia has been a prime target for pressure given the importance of Turkish schools, many of which were founded in the 1990s when the newly independent states of the region were desperate for assistance. At the time, the schools (and Gulen) were seen in Ankara as an important soft power tool. Much has changed since then.

In 2017, the Kyrgyz government saw through the rebranding of the Sebat schools, widely regarded as some of Kyrgyzstan’s best educational institutions, in an effort to placate Turkey without losing a vital asset. Kyrgyz authorities also refused to extradite individuals, including Inandi, to Turkey, as recently as 2019.

With pressure failing to accomplish its demands, Ankara has increasingly turned to kidnapping.

Around the time Inandi disappeared in Bishkek, Gulen’s nephew, Selahaddin Gulen, who had been living in Nairobi, Kenya, turned up in Turkish custody in handcuffs nearly a month after his own disappearance.

Last month, Human Rights Watch warned that Inandi was at risk of “mistreatment or torture” if returned to Turkey. The organization pointed to several opinions issued by the U.N. Working Group on Arbitrary Detention, which found that Turkey had, several times, subjected men to arbitrary detention. Kidnapping a person in a foreign country, holding them in an unknown location for a month, and then parading them on state television by default involves a series of violations of a person’s rights.

As noted above, Inandi is a Kyrgyz citizen. His state-sponsored abduction from Kyrgyzstan is not just a violation of his rights, but an abridgement of Kyrgyz sovereignty. That raises ugly questions, which can only have ugly answers. Either Kygryz authorities were complicit in allowing Inandi to be abducted, or they were not. If that latter is true, such ignorance does not reflect well on Kyrgyzstan’s security and intelligence officials; if the former is true, the reflection is even worse.

Rumors around the time he disappeared suggested that Inandi was being held at the Turkish Embassy in Bishkek, an allegation the embassy denied. When and how Inandi was transported from Kyrgyzstan to Turkey is unknown.

When the news broke that Inandi had been returned to Turkey, the Kyrgyz Foreign Ministry summoned the Turkish ambassador to deliver a note of protest. Kyrgyzstan called on Turkey to return Inandi and ensure that he is treated properly and in accordance with international law. The Turkish side, however, considers Inandi a Turkish citizen and the ambassador continued denying that any abduction took place on Kyrgyz soil.

When asked about this turn of events, Kyrgyz President Japarov noted that he had directed the country’s security forces to investigate as soon as Inanadi disappeared. He reiterated that Inandi had been warned of possible kidnapping by Kyrgyz authorities and said that three attempts had been made since 2016.

The Kyrgyz side is waiting to hear a response from Turkey, but the prospects are grim. Bishkek isn’t likely to extract a concession out of Ankara — and returning Inandi would be a significant concession — and Kyrgyzstan is unable to punish Turkey significantly via mechanisms like sanctions. Put simply: Kyrgyzstan depends more on Turkey than Turkey depends on Kyrgyzstan.

Furthermore, Kyrgyzstan’s options for partner nations to help punish Turkey, if it seeks to do so, are limited. Russia and China engage in their own extra-territorial operations, attacking opponents living abroad, abducting them, or otherwise forcing their return, often with the complicity of foreign governments. The United States has also engaged in such efforts, particularly the extraordinary rendition of suspected terrorists in the years after the 9/11 attacks — a policy, in conjunction with the wider Global War on Terror, that set the groundwork for the excuses Turkey is using to justify its actions.